Our Experience with the RCMP vs What the RCMP show Federally

Last January, James, my husband, and I thought it was going to be a normal year. Then an officer from the Calgary Police Services showed up on my door step. He explained to us that James' father passed away. It was a rough evening. Finally, the next morning James spoke, for the first time, to Cpl. Jason Zazulak, an RCMP officer from the Morinville RCMP detachment. I remember this very clearly. It was the morning of January 11, 2011.

They had a conversation about James' father, and then had a brief conversation about our impending drive from Calgary to Morinville. It was quite stormy, highway conditions were bad and Cpl. Zazulak told us to drive carefully and he would be quite upset at us if he had to send out officers on a search. There's already been one upset in the family and he didn't want to phone our parents too. A sense of humour, I knew I'd like him.

When we finally got to Morinville (almost 5 hours later), we met Cpl. Zazulak. First he explained to us the circumstances of Noel's death. Then we spoke about the property. We knew that Noel owned firearms and we knew we would have to deal with them in the estate transfer. I had already done a lot of research (in the few hours I had) on this topic. Cpl. Zazulak said they searched the house and seized the firearms which was fine. He also told us they weren't done cataloging them. My husband and I are both licensed gun owners and we expected a few guns. 50 even 60 guns wasn't out of line. He then said to us... they were up to 160 guns. James went silent. It's not often James goes silent.

I was able to tell Cpl. Zazulak that we could bring a firearms expert (my mother in-law's current husband) in the next few months. This made everyone very comfortable. He told us they would hold onto all of the firearms for as long as we needed. We asked for a full catalog of the firearms when it was ready and he was fine with providing us this.

On this same day, Const. Jamie Short brought us out to the property. We weren't entirely sure how to get there from Morinville. He led us out and helped us search the house. We were there for a number of hours. When we decided we were done for awhile and needed dinner, Const. Short left a few minutes before we did and said “if you see any body prints in the snow, kick it, make sure I'm not in it!” Again! Sense of humour, I love it!


Over the next few months, we got the list of the firearms and had been driving back and forth from Calgary to Bon Accord to clean up the property and now spring comes. We can officially claim the firearms, almost 200 of them.

John arrives to help, James heads to Morinville three days before me and they head over to the RCMP station to pick the firearms up along with the binder full of paperwork.

From what I heard, everyone had a lot of fun loading the firearms into John's trailer as John explained each of the more esoteric ones. Even Staff Sergeant Mac Richards was helping out. The officers at the Morinville detachment learned more about firearms then they ever thought possible through this estate. Not only that, after they were loaded into the trailer and ready to be moved back to the property, we were told if we had any problems to contact them. They would help us out. How awesome is that? 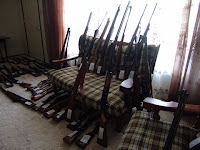 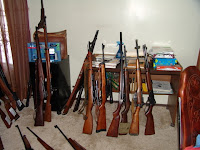 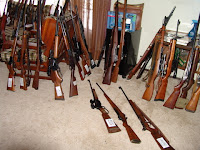 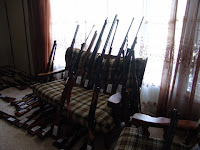 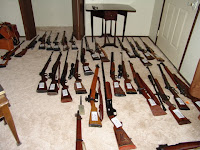 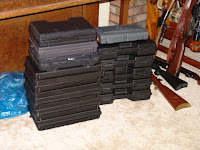 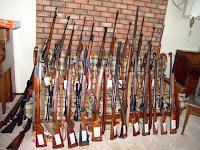 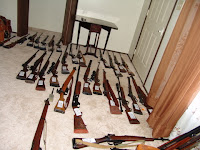 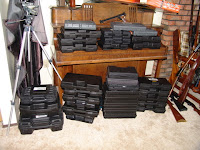 James picked out a few guns he would like to keep, I picked out a couple and the rest were transferred to John as he legally sells guns and gun parts. I'm personally pleased I don't have to deal with almost 200 guns. They are out of my hair. I tell ya, we have this down to a science. Before we got this all figured out, the Alberta CFRO and the Canada Firearms Centre helped out nicely.

With all this, we went to the Alberta Arms Show here in Calgary and James headed to the Kamloops Gun Show with his mother and John and met a lot of interesting people. Here at the Alberta Arms Show, James met Danielle Smith, the Wild Rose Party leader. They had a good talk. James told her about our experience with the Morinville detachment and she was quite interested in what he had to say. We have never met anyone from the other parties nor do they seem to care what we have to say on any topic.

After my amazing experience with the Morinville RCMP, it's sad to see what the federal RCMP are doing with the prohibition of certain firearms based on looks just because the long gun registry is about the be destroyed. It's disappointing and disheartening. Why would I trust a police force that legislates and enforces the law based on convenience? Why are they creating legislation and prohibiting firearms against law abiding citizens? It's already been proven that those of us with a firearms license are actually safer and more lawful than those without. Instead of going after us, go after actual real criminals instead of making criminals out of us.

To those who want guns removed from the hands of law abiding gun owners, please, learn the law, learn what it takes to acquire a firearms license then learn what it takes to acquire a firearm. It's not as easy as most think. My authority to transport is proof of that. Don't judge a firearms owner by the fact they own firearms. You never know who it is unless the person says “I have guns.” Odds are pretty good your neighbours are gun owners, you just don't know it. I'm more than happy to help educate those who don't know. Just ask me or the nearest guy with a license. We'll tell ya, teach ya and probably take you to the range! Most of us (in my experience) like shooting in groups. The more the merrier.