Finally, I went to the Occupy Calgary Squat


Today, I finally went to Olympic Plaza with my husband to see the Occupy Calgary squat for myself as it is what got me opinion-ating in the first place.  What I saw was more than a little disappointing.

I saw tents, as everyone knows, a few people sort of milling about, a cardboard structure of some kind and garbage, lots and lots of garbage.  There were also signs that made no real sense to me.


We walked through the camp.  Most of the "occupiers" ignored us, a couple of them said hello but that was about it.  One guy walked past us looking quite menacing.  I just smiled at him and kept on looking around.  The conclusion I've come to is there is NO protest.  A protest is an attention catcher, it gives a clear message and people are in fact interested.  At Olympic Plaza, there was CTV news, myself, my husband, 3 Calgary Police Officers and the "occupiers".  So who exactly are they protesting to and what exactly are they protesting?  Ah yes, I forgot about the mini-film crew mocking the "occupiers" dressed up and acting out "la revolucion!"  It was kinda funny.  One of them started smoking and the officers did stop him stating there is no smoking permitted in Olympic Plaza.  He looked around and said "Oh, okay, but it takes away from my shot!"  I noticed from where I was standing 3 no smoking signs.


Now, about these signs that don't make sense...


I did see the Charter of Rights and Freedoms hanging on a tent.  I didn't need a photo of it as they're abusing it anyway.  Why is it, every time someone wants to say something that no wants to hear, that someone brings out a copy of the Charter?

An issue I do have with these "occupiers" is my dad came to Canada from East Germany for the freedoms Canada holds and they're wanting to take those away through political force, not due process.  They want to change this country into a socialist, government controlled totalitarian state through so called "non-violent" anarchy instead of trying to make change properly.  And they do it in the name of equality while squatting beside the statues of the Famous Five.  Do they have a clue?

Calgary is a corporate heavy city, it always will be.  People come to Calgary to work peacefully.  If you don't want to work but you do enjoy unions, protesting and social assistance, go somewhere else.  The Occupy Movement has no place here.  The only good that's come out of it is it's shown what a spineless, useless mayor Calgary currently has and it's shown me I'm willing to back my alderman (Big Red) and speak my opinion when I feel my rights are being trampled. 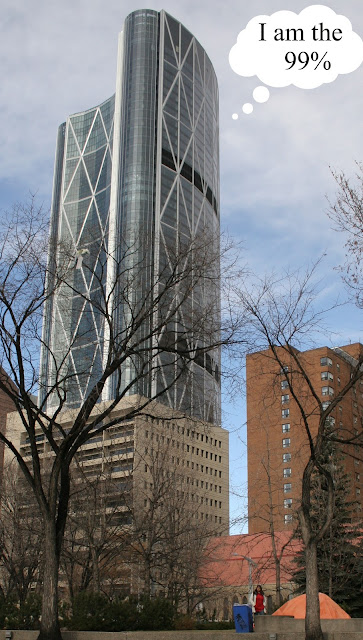