And it's come and gone with very little happening.  The city posted signs in various spots around Olympic Plaza, apparently only to look pretty.  However, when the signs were initially posted, one of the occupiers made a video stating that since the signs in the park didn't mention the bylaw number, they shouldn't have to move.  In other words, the occupiers want to get around the bylaw based on a technicality.  That seems rather hypocritical to me.

I got to Olympic Plaza just after 1:00 pm.  It was fairly quiet.  I noticed something this time that I didn't notice the last time I was there: messages written in chalk and anarchy symbols in various spots.  Why would ANYONE want anarchy of any kind?  The occupy squatters will not get the happy bunny world they're seeking with anarchy.  They would have a world in which the strong feed upon on the weak. 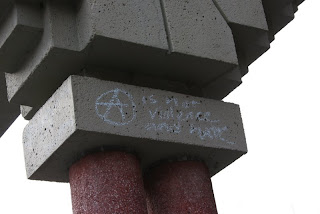 I still don't see this squat as a protest.  When I was wondering around, the only person that was active wanted to hand me a copy of the Charter of Rights and Freedoms.  I declined as I've read it before.

As I was taking photos, a homeless man approached me and asked me to take his photo.  His name is Lucien.  He said he wanted people to know he was there.  I wondered around a bit with him, met his family and got their opinion on the movement.  At first he said he agreed with it, they`re trying to change things.  Then I told him I`m pro-corporate and he changed his mind just a little bit.  You see, we`re both native, from different bands.  He`s from Tsuu T'ina and I'm Inuvialuit.  His family asked me where I was from and I told them.  His mother said to me we all have to be friendly towards one another referring to all Canadian aboriginals.  I agreed with her, but I just feel that way about people in general.  Lucien did tell me how to find him again and I will go in search for him soon.


Now a thought comes to mind, why aren't the occupiers putting energy into helping people like Lucien and his family.  Why are they fighting so hard against City Hall?  Let's go up a couple of pictures, remember the one that starts with "End Corruption?"  By focusing the fight on City Hall and law enforcement, is their message not corrupted?  Should they not show us how to change by helping people who truly need it?  Do as I do - show it, talk about it, photograph it, buy them lunch.

I've read "Why We Occupy".  It talks about how we need to better the quality of life of all people, so why are the occupiers not doing so for others?  Why is it on my shoulders or City Hall's or Corporate Calgary's?  It talks about how they want things change for the sake of human welfare, but again, the occupiers are so focused on the action, they've lost the meaning (if they ever had it in the first place.)

The occupiers need to leave Olympic Plaza, they need to figure out what they want and they need to realize that the method they use to send their message is so very important.  Actions speak louder than words and quite frankly, I'll listen to someone talking to me from a soup kitchen before I'll ever listen to someone squatting in a park to prove a directionless point.